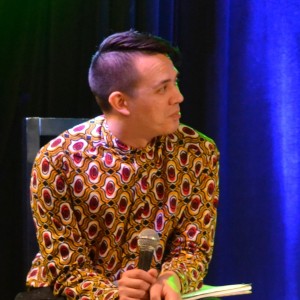 I’m a storyteller and a people weaver. I am the host of a podcast called Let’s Find Out, helping Edmontonians answer questions about local history.

Born and raised in Edmonton, I love telling stories about this place through podcasts, radio, writing, public speaking, and illustration.

From 2014-2018, I worked as News Coordinator for CJSR, Edmonton’s campus and community radio station. I trained news volunteers in skills like field recording, production, interviewing, and ethics. From 2011-2014, I helped produce a nationally-syndicated environmental news show called Terra Informa on CJSR. I also created CJSR’s arts and culture show All That Matters.

I served as Edmonton’s Historian Laureate from 2016-2018. During my term, I created the podcast Let’s Find Out to encourage Edmontonians to learn more about local history and how to do solid research. The podcast and my public speaking duties focused on queer history, cultural communities often left out of our city’s narrative, and how humans and nature shape each other.

In print and online media, I’ve written about how Canadian nuclear physicist Harriet Brooks changed the world (CBC), Vivek Shraya’s groundbreaking documentary What I LOVE About Being Queer (The Wanderer), and the health effects of Alberta’s droughts (Vue Weekly). In 2011 I worked for CBC Radio in Toronto as a Peter Gzowski intern, where I produced for shows like Metro Morning, Big City Small World, and As It Happens.

In 2012, I founded Shareable Neighbourhood, a grassroots community group that organized tours and workshops about the culture, ecology, and history of Edmonton’s Old Strathcona neighbourhood. Our work culminated in the Old Strathcona Greening Project in 2015. In partnership with the City of Edmonton and Rotary Club of Edmonton Whyte Avenue, we put rain barrels and composters into the hands of residents, got them to show off their newly-acquired knowledge of how to use them on public tours, and built a living wall at the Roots on Whyte Community Building.

This site is called boots on the ground because that’s where I like to be, right in the thick of things. It’s also a reminder to myself to stay grounded in the dirt that gave birth to us, and that we hopefully nurture along the way.

Contact me for public speaking engagements, interviews, or freelancing at