Last weekend was kind of like Christmas and my birthday all rolled into one, but with more pink glitter. Some friends I hadn’t seen for years came to town just in time for the Pride parade, and taught me about a fascinating idea: the need to test the invisible webs around you. This week, I needed to test one of mine, and it was harrowing but marvelous. Before I get to my little web though, let me explain what happened. 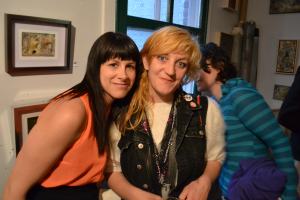 As the Edmonton Journal noted, there was plenty to celebrate at Pride this year, and I was happy to march with friends in Camp fYrefly, a leadership retreat for queer and allied youth. The creamy pink frosting on top of this cupcake, though, was finding out that my friends Kathleen and Daltry were both in town. We went to a tiny, intimate concert together at CKUA, and sat cross-legged on the floor together surrounded my sweet music.

Of course, what brought them back to Edmonton was not so sweet. A friend took his own life recently, and they’d come for his service.

Daltry’s mom was there too, and we were exchanging stories and proverbs by the punchbowl when the conversation turned to this friend, and what had led to his suicide. If only, she said, he could have seen the massive web of love that coalesced around him for that funeral, seen it while he was still alive. If only, she said, we had more chances to test those webs and see what they look like.

It was funny because someone else at the concert had just told me about another kind of important test. She was about to travel to Montreal, and I asked her if she planned on joining the protests there. She sighed, and said probably, but she was pretty anxious about getting arrested. A fine would basically ruin her finances at school for the next year, but she said the Quebec government’s new laws to restrain the movement made it hard for her to shut up.

It frustrated her because it seemed to confirm a theory of Nietzsche’s: that in Western democracies, we never really exercise our liberty because we trust that it’ll be there when we need it. That in a moment of crisis, the state would give us space to claim it. To her, the laws banning masked protests, unannounced gatherings of 50+ people, and fines in the tens of thousands of dollars for students group illegally organizing, smacked of a promise that was shown as false the moment it was tested.

What occurred to me was that the Pride parade is just such an event: an opportunity to test the webs of liberty and love that we hope are there. Twenty years ago, marching down the street declaring this kind of love here meant getting chased down the street and called faggots, and risking beatings from homophobic crowds. In most places in the world, it still does. This year, that test was honoured in Edmonton by the appearance of our province’s premier, and hours of rainbow flags and heavy mascara and dance music downtown.

Which brings me to my own harrowing test this week. After the glitter settled, I realized I had mixed up a deadline and had less than 24 hours to make a gigantic job application, with three sealed references, physically manifest itself across the country to be hand-delivered. It happened.

I’d like to say it was incredible, but it was really just implausible. So many brains working so hard to get these documents together, and printed out in another city? I felt like I was facing sub-District 12 odds of making it. But friends and old bosses pulled through in a way I was honestly astonished by. It was humbling.

It’s not often we get a chance to test those invisible webs. I am truly blessed to say that when I needed mine, it was there. To every one of you out there who’s part of it, thank you.

I have this weird thing where I always run for at least 32 minutes. It took me a while to realise that running is more important for my brain than for my body. Every time I go to the gym, I think of this quote from Will Smith:

“In one of my songs, I write, ‘The key to life is on a treadmill. I’ll just watch and learn while your chest burns. Because if you say you are going to run three miles and you only run two, I don’t ever have to worry about losing something to you.’ I started running about five years ago. Running introduces you to your worst enemy, to that person who tells you, ‘Ooh, our ankles hurt and we should stop. Why do we need to run five miles? Let us run three miles.’ That is the same person who says to the man, ‘Hey, your wife will never find out if you sleep with her,’ and the same person who tells the 16-year-old, ‘You are not going to be cool if you do not smoke it.’ If you start giving in to that person, you will never get to your goals.”

How a train car reminded me of cruelty and caring

So I just got to Vancouver for a week-long sustainability conference. The first thing that hit me as I climbed up to the Sky Train was, thankfully, not a messy present from the apparently perpetually-circling seagulls. No, it was a memory and a thought about good and evil.

You see, my friend Jon wrote a great one-man show called Big Shot that zooms in and out of a shooting on the Sky Train. You meet all these characters that are part of this moment on the train, and start to feel less and less comfortable calling any of them “innocent” bystanders.

All of them have acted in morally ambiguous ways leading up to that instant, from a cop profiling people on the street to an old Japanese man pickpocketing from people he feels victimized by.

What the play said to me is that it’s incredibly easy for our moral order to be ripped away by one disruptive event, and that it doesn’t make sense to call people good or evil. The truth is that we’re all capable of both.

We’re capable of killing — violently, cruelly — but we’re also capably of building something new, of deep caring and altruism, as long as it makes sense to us. If you’ve seen The Dark Knight, think of the climax where the Joker gives two ferries full of passengers a bomb and a choice.

One is full of prisoners, the other is full of ordinary citizens. Both are given the switch that will detonate a bomb on the other boat. And they’re told that if one of them doesn’t press the button, they’ll both be blown up. I won’t give away what happens, but it shouldn’t surprise you that the passengers on each ferry start to seriously discuss the worth of the lives on the other.

We could have a whole other discussion about how to define “good.” For right now I’ll leave that to my friend Dan the philosopher and say I mean something that’s generally useful to the community’s health and well-being and either helpful or not overly harmful to an individual.

What our political leaders think we’re capable of

Unfortunately, if you were to ask most of our political parties whether people are naturally good or bad, the honest ones would answer, “Bad, of course!”

Almost all of our laws and regulations are based on the worldview that people have inherently bad tendencies that must be tempered and restricted.

I’m not just talking about the logic behind the federal Conservatives’ strategy of answering crime with the threat of more and more severe mandatory jail time. You can also see this in the way we think about pollution. We assume that industries will pollute as much as they can get away with, so we set caps on emissions and runoff. Maximums.

Markets are mostly designed the opposite way: to harness people’s tendencies to want to consume, make a profit, and invest, and to channel that motivation to some desired end. The way this is structured in most societies ends up making some of us very rich and some of us very poor, of course.

But what if we took some lessons from this way of thinking, to positively harness our motivations?

How can we reinforce and encourage the “good” things we’re capable of? What would that look like when city councillors sit together under a big glass pyramid and come up with policies?

What about setting a minimum threshold for a lumber mill to make their river healthier? It’s not so unreasonable to imagine a world where we have minimum quotas for the health and diversity of the species living in the river they sit beside.

What about setting up matching grants for business owners and residents who have an idea to make their neighbourhood more attractive with a new awning or some new benches?

Actually, that second idea has already worked in cities like Seattle and Portland, and a couple years ago Edmonton’s City Council was kicking around the same proposal.

I wrote a story about it at the time, when Councillor Janice Melnychuk set up a community investment fund for projects like that in Alberta Avenue. At the time, she was hoping that people living and working in the area would come up with proposals for things like public arts projects and new streetlamps. I haven’t had a chance to follow up with it since, and I’d be very interested to see where it’s at now.