One of my favourite parts of making Let’s Find Out is taking on questions that have never even occurred to me. The latest episode is a great example of that.

Dustin Bajer (a friend of mine from back in the Shareable Neighbourhood days who I love chatting with about nature) was the curious Edmontonian for this episode. He asked how Edmonton came to be known as a prairie city.

When I first read his question, it made my brain spin. In school we were taught that this region is part of the Aspen parkland biome – a mix of grasslands and deciduous forests. But you do see Edmonton businesses and artists taking on the “prairie” label all the time. So how far back does that reputation go?

Figuring out the answer was incredibly complicated. We found seemingly contradictory answers from old newspaper editorials, advertising materials aimed at prospective settlers, a local land conservation organization, and traditional Indigenous knowledge keepers. To parse it all, we ended up paying close attention to how far out we were zooming with our historical lens. What matters most? The last 50 years? 200? 10 000?

I’m proud of the nuance and struggle in this episode. It feels authentic to the process of answering any good historical question. There tend to be a lot of caveats and assumptions we need to examine.

Also any episode where I get to go hiking and learn some new words is a treat.

So it’s been a long time since I’ve written about Shareable Neighbourhood, and it’s grown a lot over the last year. As you might know, it’s the little volunteer-run community group I started back in 2012 to get people sharing knowledge about local history, nature, and culture in Edmonton’s Old Strathcona/Mill Creek area. When it started, we were leading backyard garden tours, foraging walks through Mill Creek Ravine, hosting local filmmaker showcases, that kind of thing. But the plan has always been to “level up” everyone participating, by taking on projects together.

With the support of the City of Edmonton and the Rotary Club of Edmonton Whyte Avenue, we came up with a Greening Project to get rain barrels and composters out to more people in the neighbourhood, for very cheap ($20). We created workshops on composting and rain barrel basics for the participants since most of them were newbies, and got tools they could borrow to install everything themselves. In exchange, they’ll be sharing what they learned on one of our public tours, and putting up signs announcing that they’ve become a Mulch Master or a Water Warrior.

It’s been tremendous fun so far. Putting together a grant proposal, making distribution maps, finding suppliers, and getting reimbursement cheques hasn’t exactly been riveting. But seeing the look on people’s faces when they finally get their big honking new composter is so satisfying. Today Finn and I led the first rain barrel workshop, and it felt so good to live the Shareable Neighbourhood spirit of being a proud non-expert, and still sharing what we know and helping other people feel more confident installing one themselves. 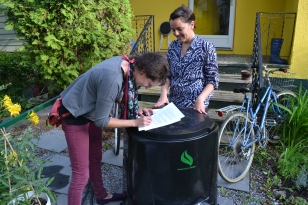 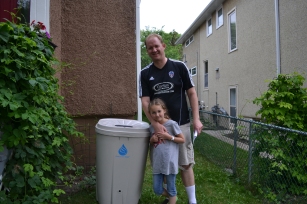 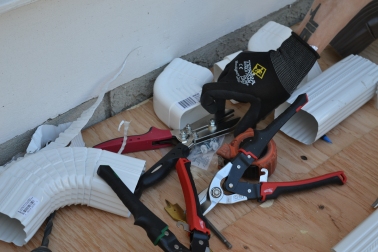 Next month, we’ll be doing the public tours, and then at the end of the summer we’ll host the last part of our project: building a living wall together in the Roots on Whyte community building together with Axis Mundi. We’d love for you to take part. It’s such an honour to be in the company of a group of volunteers and community members who care so passionately about this place, and want to make it better.

This spring, I’ve had the chance to peek into what life without ID looks like in Canada, interview one of Canada’s most interesting authorities on environmental policy, and produce the most music-centred story I’ve ever done for Terra Informa.

First off, the story I made for the many people who asked to hear the recordings I made of artist Páll Guðmundsson while I was in Iceland. This story was a mix of liquid luck and preparation that paid off. If ferry workers hadn’t been striking in south Iceland where we originally wanted to go, our friends at the tourist bureau in Reykjavík would never have recommended we go check out Páll’s rock sculptures in his tiny summer village of Húsafell. Fortunately I had packed my pocket-sized Zoom audio recorder just in case I met someone life changing, whose story I absolutely needed to tell.

Have you ever gone somewhere new and had the feeling that you’ve been there before? Imagine going away on a trip and finding that everything you see reminds you of home: the stores have the same shape and sell the same clothes, the restaurants serve the same sort of food, the people listen to the same kind of music…

What about somewhere embraces its own character and qualities? That’s what I saw in Páll Guðmundsson, an artist whose local and naturally inspired work makes his home feel one-of-a-kind. Listen from about 10:18:

Next, my interview with Scott Vaughan, Canada’s former Environment Commissioner and the new President and CEO of the International Institute for Sustainable Development (IISD). IISD just took a big leap forward for themselves, and for aquatic science in Canada, by successfully negotiating to become the new operator of the Experimental Lakes Area in northern Ontario. It’s one of Canada’s most important (and most famous) scientific research facilities.

There, scientists have a unique ability to conduct experiments on entire lake ecosystems — in some cases, their research lasts over decades. The research there has caused major changes in the way we live in Canada: like how acid rain affects freshwater fish, and how phosphates in our detergents can cause algae blooms.

But in 2013, the federal government said it felt the Experimental Lakes Area’s research was no longer necessary, and to be be shut down. That set off a mad scramble from environmental groups, activists, and researchers around the world to find a way to keep it alive.

I got a chance to meet Scott Vaughan at the Zero 2014 sustainability conference in Edmonton to discuss how the year of upheaval will affect the research at the ELA, and what he learned about the federal government’s attitude towards research during his time as Canada’s Commissioner of Environment and Sustainable Development. We had a frank talk about whether he and the other parliamentary officers who’ve irritated the government ever get together and commiserate, but regrettably I had to cut it out of this Terra Informa story. The rest still makes for a fascinating story, I think. Listen from about 1:28:

Finally, this week I finally got a story out that I’ve had in my head for a long time. Last year, I noticed a flyer up in the Stanley A Milner library in downtown Edmonton, advertising an ID storage service at Boyle Street Community Services. I was intensely curious why anyone would need to have the centre lock their ID away. It led me down a rabbit hole of the frustrations that face seniors, homeless people, the recently-incarcerated, anyone who wasn’t born in Canada, and ultimately, our democracy.

You can check out the story online or on newstands in Vue Weekly.