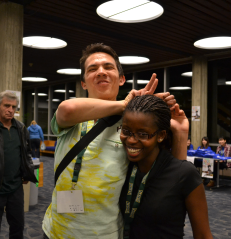 While I was at the GLOBE Conference last week, someone mentioned I need to be less exasperated with people who don’t think the same way I do. The world needs some connectors, some mavens, and some… well some other things, she said.

I like watching the steady stream of events around town, job opportunities, conferences, funding opportunities. Not all of it is stuff I can take part in, but I love connecting people to it. So in the spirit of fellow Edmontonian KikkiPlanet‘s #yegenda, I’ve decided to start a little section on the website here to share the good stuff. It’s just called Community.

I heard an interview with Kikki on The Unknown Studio a few months ago (an Edmonton podcast that does local interviews worth checking out) where she talked about her calendar. She said people told her sometimes that there wasn’t anything going on in Edmonton, which is a common lament from anyone who’s had a taste of Toronto or Montreal. But actually, she said, there’s something cool happening every night of the week if you know where to look.

There are plenty of events calendars out there, so I’m going to try to share things that I’m interested in, and things you might not hear about otherwise. That will probably mean science lectures, social justice and environment workshops, queer events, and the odd scholarship or grant I see. Right now I’ve started with a pop-up multicultural teahouse, an Albertan women’s film series, Public Interest Alberta’s conference next month, and a few other goodies.

Have a look, and let me know what you think! What am I missing? What would you like to hear about?