The other day a friend asked me (delicately), “What’s it like having a government that hates you?”

It’s crushing. It’s been hard since Alberta’s provincial election this year, I won’t lie. Your friends and family and neighbours and fellow shoppers elect a new government, and one of its first priorities is outing queer kids to homophobic parents. Next on the list is setting up a snitch line for reporting un-Albertan activities. And of course, cutting the only actual mechanism everyday Albertans have ever had to see a fraction of the true cost of burning carbon.

What does a queer journalist who loves the planet do?

You watch the new Dark Crystal series, and try to remember why people fight in the darkest night. You remember how much people need stories that show them how to hope.

It’s reminded me why we’ve been making a season of Let’s Find Out all about the ways humans and nature have shaped each other in our city. Trying to show that our relationships with the land are complicated, that we don’t have to be antagonists. We are creatures who have built massive hydro dams to dilute our pollution downstream, who have turned grizzly bear country into canola and wheat and buried the memories. But we are also experimenters bringing apricots to our city streets all the way from Harbin, and we are creatures who feel kinship with a new country because we find the same high bush cranberries we had back home.

Last weekend my friends and I went tree planting in Fulton Ravine. I got there a bit late and I wasn’t super speedy with my shovel, so I think I only planted four of our little white spruce saplings. But it felt good, and right. It felt like refusing to let the void win.

Today I got on my bike to head home, and I remembered that my husband had texted to encourage me to breathe in some of this nice fall air while it’s here. So I took the long way home. I went a few blocks out of my way and started down the 83 Ave bike lane. And when I stopped at a red light, I looked back and saw a friendly neighbour behind me, Conrad Nobert.

We talked about our travels, and about Greta Thunberg. And then Conrad said hey, we’re biking down the bike lane you wrote about. You helped make this happen.

And I’d almost forgotten. Back in 2012, when Isaak Kornelsen was biking down Whyte Ave, and was killed by a truck driver. It hit so many of us around here hard. I never even met him. But he was young and mattered and it was so unnecessary. The cruelest part of it all was overhearing a bus driver talking about it right afterward with a passenger. He said, “Why didn’t he just ride down 83rd Ave? I feel bad for the driver.”

I was furious when I heard that. I went home and wrote a blog post about all the reasons Whyte Ave was the best of some terrible choices. Every other street north and south for six or seven blocks was full of one-ways, or dead-ends, or even more dangerous traffic. The part I almost forgot was that we won.

Conrad and others pushed hard to make our roads safer. After that, we started to get real protected bike lanes in this city. Conrad said it felt great being able to take his teenage kids down this one, and see little kids using it all the time too.

What does it feel like to live in Alberta these days? It feels dark a lot, it’s true. But sometimes it also feels like maybe, just maybe, we’re lighting it up again too. 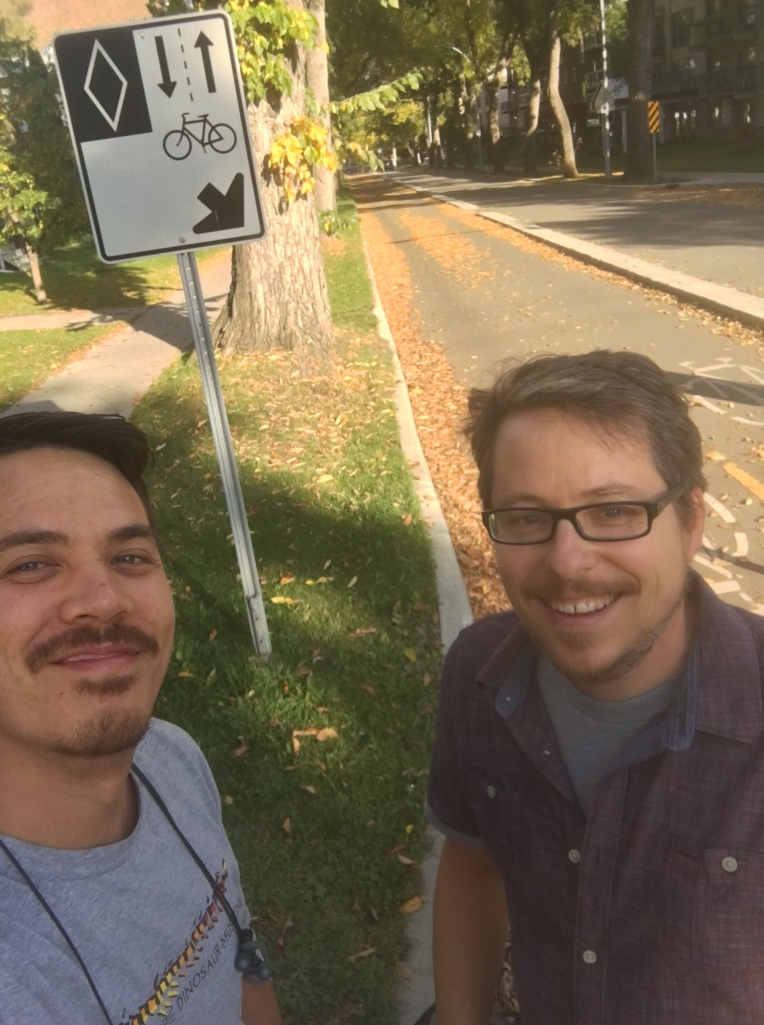 2 thoughts on “I almost forgot we won”